Thinking about selling my motorcycles

Those TX's weren't known for reliability or longevity. You're either lucky or you maintain it exceptionally well or both. Anyway, it is a cool and little remembered piece of m/c history
A

Nihonto Chicken said:
After scoring my grail bike a few years ago, a low mileage Moto Guzzi V11, it took a mechanical dump on me. Well, it's Italian, shoulda known. Then my Suzuki DR650 did similar. Been months now since they took their near simultaneous squats, and I'm not missing them all that much. Will eventually get them running and likely raffle them off.

So ends a 55 year riding career of over thirty street and dirt scooters, from Bridgestone 175 to Suzuki GSXR750 and Honda XR350 to Maico and Yamaha 490s. Fun while it lasted, but that was then and this is now. Total of eleven broken bones (all in the dirt), but overall no regrets. I fear the coming generations may never experience the thrill and joy of gasoline powered bikes, a pity.
Click to expand...

V11 Sport? Interested in hearing what crapped out.
Larry

Oil low pressure light stays on after start up. Was intermittent, would go off after shutting the engine down and restarting, but one day it refused to do so. I rode the bike about four blocks before calling it quits and contacting AAA for a tow home. Dropped the pan, no metal shards. Got a new oil pressure sensor to see if the low pressure indication is real or not, but haven't as yet tested this.
F

Feedback: 9 / 0 / 0
Sold my last one over a year ago.
72 years old, my reaction time and ability to concentrate are not as sharp as they were.
Add in vast numbers of inbred, 3rd world, no license or insurance drivers, tourists,
people texting....nope.

Sure would be nice to move somewhere rural and quiet, like it was here before they built 50,000 houses/condos/timeshares/apartments around us.

Mebsuta said:
My skateboard vanished about the time I got my DL. I been thinking about getting another one. I just want to roll around at night. I want a Banzai with a wooden deck and wide trucks, but that's gonna be found in an estate sale now. I don't know yet. If I get hurt bad enough, I become a ward of the state.
Click to expand...

I'm out, as of several years ago after having ridden all my life.

Now, I play guitar when I'm antsy.
Click to expand...

I was not anywhere near as rad as you, but I remember really wanting Tracker Trucks for my Santa Cruz red-dot board.

Nope - never go them before we moved to the sticks and there were (literally) no sidewalks.

Feedback: 20 / 0 / 0
All I ever did was roll around, but I was jellis of people who were good at skating, roller or boarding.

I remember when somebody down the street got a Logan Earth Ski. Wooaah.

I used my skateboard to fetch the dog when he got out. I probly would have forgotten about that, but my Mom talked about it.
Last edited: Sep 2, 2022
G

Feedback: 1 / 0 / 0
Just the Real deal Jeff Ho with no parts ( Drilled for trucks several times and beat to shit with pressure dings on the glass everywhere ) will most likely set me back 400.00 to 600.00 especially if it’s a 1975 and the original graphics are readable
G

Feedback: 1 / 0 / 0
I now have a Downhill Bahne from
First batch produced 73-4 ? That is all original ( OEM trucks and pre sealed ball wheels ) that is in decent shape as trade bait for the Zephyr
G

Feedback: 1 / 0 / 0
As far as Bikes go my 75 HD MX is rarest but my 67 VW Trike is a handbuilt one off , but thousands of those were built over many years by many people but none are like mine is exactly. Folks don’t sell your shit if your not hard up , as it most likely can’t be replaced or replaced cheaply
T

Feedback: 0 / 0 / 0
I know the feeling when it's time to give it up. Been riding for 40 years, pretty much decided to give it up & sell the ZX-14 and the ZZR1200. Both impressively fast and fun, but all the cage drivers on their cell phones have made it too hazardous to keep riding.
A

J. Armstrong said:
Those TX's weren't known for reliability or longevity. You're either lucky or you maintain it exceptionally well or both. Anyway, it is a cool and little remembered piece of m/c history
Click to expand...

My father bought it new in 73. Has 12k original miles. Original and hasn't been messed with. The old man did all the recalls and updates. It really was a bike ahead of its time.
It's looking for a new home. Lol 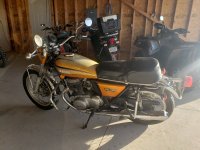 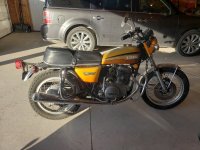 Feedback: 263 / 0 / 0
I have one I'd like to sell. The Mrs. likes to ride occasionally so I keep it around, probably don't do more than 200 miles a year.
I'm getting older, don't heal too well or very fast anymore. And I prefer the quiet, air conditioned car ride more than anything else.
My bike is old, cheap, cheap to maintain, cheap to insure, don't eat much, don't take up much space. A couple trips to dinner a year when the weather is nice is the only reason I keep it around. And when we go it's rural Indiana to small mom and pop restaurants where I don't have to worry quite so much about getting run over. I've had my share of MC wrecks, hope to avoid them for the remainder of my days.

But really, most of us eventually come to that fork in the road. Old things we held near and dear just don't command the same love they once did. Priorities change, life happens. It's good to rid oneself of the things that we have no use or love for any longer.
Last edited: Sep 2, 2022
A

twinlamp said:
I know the feeling when it's time to give it up. Been riding for 40 years, pretty much decided to give it up & sell the ZX-14 and the ZZR1200. Both impressively fast and fun, but all the cage drivers on their cell phones have made it too hazardous to keep riding.
Click to expand...

Sold - traded my zx14r for my wife's yamaha. Took a bath on that deal, but she was happy and I was tired of folding myself up to ride it, but that engine was a thing of beauty. Super smooth delivery if you rode it smoothly. Brutal acceleration if you asked for it. Bad thing about it, other than sportive ergonomics was if people tried to pass me, I wouldn't want to let them, and that bike could certainly back it up.
Three hours was about my limit for riding it though.
Triumph tiger explorer. 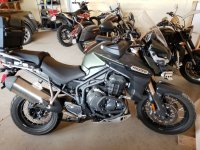 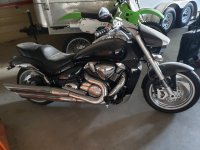 Feedback: 70 / 0 / 0
Tough call, giving up two wheels.
Got fucked up by a woman running a red light 13 years ago. I feel the hardware every day.
Sad to say, though I still ride, I see reasons to hang it up everyday.
I’m no proponent of ‘”more laws”, but something needs to change with these fucking phones.
Here in Charlotte, NC I think people believe that it’s impossible to operate a motor vehicle without the phone in hand.
75 mph staring at a 4 inch screen, and showing others in the vehicle what Joe had for lunch. What could possibly go wrong?!?
Instachat, Snapgram, Facespace.
WTF?!?! happened to people?
Don’t get me wrong, as I’m guilty of time on the screen as well. But, not when I’m driving. And not to the extent that I see the younger crowd indulging.
Crazy too, as I recently watched the “Black Mirror” series on Netflix after someone here referenced the episode “Metalhead” when talk about robotic dogs started. I just (last night) watched the episode called “Smithereens”. Like most of them, this one ran a serious parallel to things going on today.
This particular episode was centered around an app company, and what is has and can do to people. So accurate.
A man goes after the company head. Pretty good story.
If you’ve not yet checked out the series, I would definitely recommend it. All but a couple were good. Albeit dark. Very ”futuristic“.
Kinda scary, as well considering that a lot of it doesn’t seem so far fetched anymore.
To the OP, I wish you well in whichever direction you choose. I know it’s a hard decision to make.
One of these days I’ll probably tire of dodging the assholes to the point of calling it quits myself.
Although, as Harleyrider put it, I’d say odds are just as likely that I’ll die on a bike.
I could think of worse ways to go.
I just hope that it’s quick and pain free.
The last “incident” still pains me daily.

Feedback: 19 / 0 / 0
There's not a day that goes by where I don't have to swerve in my lane to avoid getting hit by the idiots on their phones. I'm glad I sold my last motorcycle. The idiots on the roads today are just too dangerous.
A

Feedback: 4 / 0 / 0
Appreciate all the support.
Just feel riding isn't as fun as it used to be.
The summer before last we went to the black hills for a few days. I brought the triumph tiger.
Rode the pigtails and through Custer state park. It was absolutely beautiful and a great ride.
But, the wife and kid couldn't-didn't want to go with. I used to go for the weekend and ride the beartooth highway, or the black hills. It just doesn't work for spending time with the family.

Sold my kx500 during covid. Was an awesomely impractical bike. 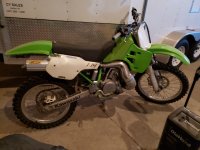 The ktm 690 is my remaining dirt bike. It checks all the boxes of a street legal trail capable dirt bike. 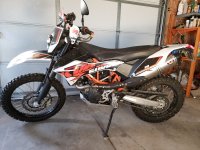 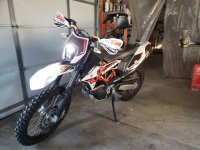 Giving a friend a ride.

The Indian represented freedom for a 17 year old...

Just scanned from a slide that my Mom took (and I happened to find again a few days ago), without dicking with adjusting color balance.

I look about the same, of course... 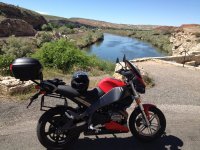 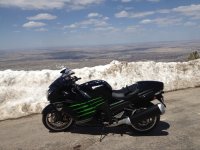 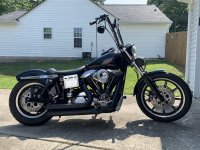 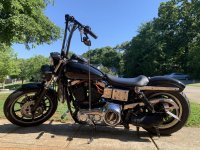 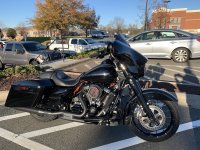 Giving a friend a ride.

The Indian represented freedom for a 17 year old...

Just scanned from a slide that my Mom took (and I happened to find again a few days ago), without dicking with adjusting color balance.

I look about the same, of course...

Nice! That would be worth big money today. Its been converted to right hand throttle, left hand shift. Back in the day... my buddy Tommy had a '50 Chief with the original left hand throttle, right hand spark advance and shift. He'd get tanked up at the local blood and guts bar, and couldn't ride it the five miles to his house. I was the only one of his pals that could ride that bike so...
Larry
M

Feedback: 0 / 0 / 0
Exactly what Brunop mentioned. There’s to many selfish completely self absorbed people on the road Fuckin around with their phones so I to tapped out of the motorcycle world about 5 years ago
F

alphadog58 said:
Nice! That would be worth big money today. Its been converted to right hand throttle, left hand shift. Back in the day... my buddy Tommy had a '50 Chief with the original left hand throttle, right hand spark advance and shift. He'd get tanked up at the local blood and guts bar, and couldn't ride it the five miles to his house. I was the only one of his pals that could ride that bike so...
Larry
Click to expand...

Speaking of spark advance, you didn't want to forget to retard it when kicking over the Indian. I think that my right leg is still a little shorter than my left from doing so...