Feedback: 19 / 0 / 0
I know that Rhodesian A5 combat/riot shotguns have become increasingly desirable (and expensive as a result) and am wondering who brought them in and what time period did they come into the US?

Wouldnt mind owning one one day but right now just trying to find out a bit more about them.

Feedback: 0 / 0 / 0
Do a search on this forum and you will come up with some decent info, also try Shotgun World. I've copied a bit of a previous response of mine as follows. The last import batch came in a number of years ago (in 2014, I believe) through Sarco, priced at $995 a pop. Here's the Shotgun News ad: 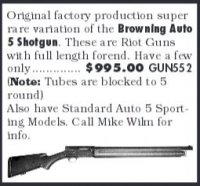 There were apparently less than 700 of them made/imported in all (no RA serial numbers have yet appeared over the 6xx range). They surface every now and then for sale from private parties, but the tariff has escalated to about the three kilobuck range (though some hard working dude perusing GB recently scored a mis-identified one for about half that amount). If interested, below is a link to a list of the RA and corresponding FN serial numbers of examples I have seen (pics only, not in hand). These Rhodesian shotguns were obviously not a consecutive number FN model run (note, they don't say Browning anywhere). How they were selected remains a mystery, AFAIK, possible something to do with evading import restrictions at the time? There are various theories as to the date and route of these shotguns from FN to Rhodesia, maybe late '60s to early '70s, maybe through South Africa, who knows?

Good luck in finding one up for grabs, but, unless you get very lucky, be prepared to pay somewhere in the neighborhood of $3500, perhaps more as time passes. With apparently less than 700 of these made in total, they have to be considered as a quite rare military issued long arm, far, far fewer than, say, appropriately prized Rhodie poop FALs.
K

Feedback: 8 / 0 / 0
They show up I grabbed one a few months ago from gunbroker. I was lucky the seller mentioned nothing about what it actually was except an old auto 5
K

Feedback: 0 / 0 / 0
Wow, nice collection! Just to make sure I'm not misunderstood, let me say that those Rhodie FALs are perhaps more generally prized and valuable than the FN Police shotgun, but they are not as rare. I would like to have such an FAL myself, were it not for the PRKaliforniastan neutering restrictions. Maybe I'll score one in the future if and when St. Benitez's ruling is upheld, but I may not live that long.

Edit: P.S. - You probably already know this, but just in case, if you store the shotgun vertically in your safe or where ever, do so muzzle down so as to not sack out the irreplaceable butt pad.
Last edited: Aug 3, 2021

I was young and dumb, likely full of something.

I bought one at $99, then two more kits for $10 more. Sold one- a ZA-marked T3 lower kit with the green/yellow/tan paint- to someone who really wanted it and paid for all of the kits. One of the few good investment wheel deals I've made regarding firearms.

Wish I would have jumped on the A5 when they were affordable.
You must log in or register to reply here.
Share:
Facebook Email Link
Top