Feedback: 10 / 0 / 0
Individual graves of the American fallen interred at Netherlands American Cemetary are each tended-to individually by a Dutch family. Each adopted soldier's grave site's care-taking is often handed down within a Dutch family generation to generation for the past 70 years.

There is a waiting list of Dutch wanting to take over the duty.

They often deliver flowers on Memorial Day, the person's birth date, their date of death, their religious Holidays; Christmas, Passover and others.

Location
Texas on the Brazos

Feedback: 3 / 0 / 0
The Netherlands is a comparatively small nation of only about 17 million,,, that it still exists as a nation is due to the sacrifice of other nations,,, what ever measure of gratitude that is felt by Holland's population is probably equal to that felt here in the USA by those capable of feeling gratitude,,, it's a diminishing percentile,,, especially among those who are entitled and can feel no gratitude.

A lifetime of dedication and respect.
Willemien Rieken was only 9 years old when she first began laying flowers on the grave of Trooper William Edmond, a British hero who fought and died to liberate her Dutch village. From that day, and for 75 years, this amazing woman looked after his grave and kept his memory alive. During WWII, William served with the 1st Airborne Reconnaissance Squadron, and took part in the Battle of Arnhem in the Netherlands. Sadly, on September 17, 1944, he was shot in the back by a German sniper. William was buried at the Arnhem Oosterbeek War Cemetery. On July 24, 2020, the woman who spent 75 years tending his grave passed away, at the age of 85.
We will remember them

In the Netherlands, there is still a waiting list for those willing to volunteer to take up the grave-tending. 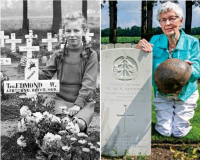 Feedback: 55 / 0 / 0
Not only US, but Brits, Canadians...
A good part of The Netherlands was freed by Canadians, and Canada Day is celebrated there.
P