Feedback: 231 / 0 / 0
Recently ran across a Ruger Security-Six .357 snubby. It had an ugly (to me) set of aftermarket target grips on it. The rear sight was worn on the left side to where it looked as if someone took a file to it. The gun itself wasn't too bad otherwise other than a minor finish flaw on the left side. May have been from carry, but looks more like something was spilled on it at some point. Nothing really major or extremely noticeable. Found a set of factory grips, and ordered a new rear sight assembly from Gun Parts. Decent looking old piece now. Built like a tank. Would rather have had a 4 inch, but for no more than I have in it, she'll do fine.....lol 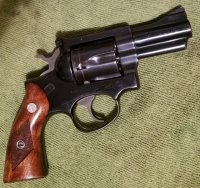 Don't Tread On Me!

metalreptile said:
I agree it is a LOT better than when I got it! A Security Six was my second handgun when I was MUCH younger. I love them!
Click to expand...

Feedback: 19 / 0 / 0
Those guns are built like bank vaults. And have been underrated for ages IMO

A Security-Six was my second "real" handgun too.
(Not this one though - this one was $200 at some gun show ages ago)

I traded my original Security-Six for Remington 788 in 6mm (which I hardly ever shot).
I traded the 788 toward a Browning A-Bolt in 30-06 (which I still have, and which I have every intention of still having when they bury me).

An old Low-Back I tote sometimes.
This is the purtier one of two I got.
The uglier one I used to leave out for the wife "just in case."
Uglier $150 gun from Potomac Arms in Alexandria. That place is gone now. Hoity-Toity millionaires Boat Club on that site now.
I don't leave the ugly gun out for the wife any more. She's too daffy to count on for such things at this point. I can't think of any scenario with her where the addition of a firearm would be a benefit. So the Ugly one is in one of the safes somewhere last I saw it. I should dig it out and at least take a picture.

I tried it with one of those T-Grip things.
Which I hated.

Feedback: 14 / 0 / 0
Loves me some Ruger “Six” series revolvers and have several, all stainless. I run Herrett Shooting Star stocks on my 4” belt gun and Pachmayr Compacs on my favorite Speed Sixes. Kicking around camp I usually have a Ruger .357 magnum on my hip, a 4” Security, Snub Speed Six, or SP101. I am comforted by each one. Dad had a blued Speed Six which now belongs to my nephew. Dad “presented” it twice in his defense to good effect. Once was opposing a group of outlaw bikers in the middle of nowhere Nevada. As Dad told it they were suitably, and immediately impressed with the old dude (WWII Vet) apparently willing and able to use his magnum.

Feedback: 140 / 0 / 0
The snubby in blued finish is probably a somewhat rare bird. I don't know the production figures all that well, but most were stainless, like 90%, and most were either 4" or 6". I like the Security Six, but I never owned one. (Until recently). The GP100 came out at the time I was looking for a .357 Mag. I thought it was cool, so I bought one of those instead of a Sec. Six. It wasn't until much later that I got a 2-3/4" stainless Security Six.

Feedback: 0 / 0 / 0
My first double action revolver was a Security Six and I recall it was $87 nib from the Outdoor Store when I bought it. BIL talked me into it and got me reloading to feed it. Ended up being broke and traded it for a set of tires.

Feedback: 0 / 0 / 0
6" blue Security Six was my first handgun purchased new in 1977. Sold it when I got my first Redhawk in 1981. My Security Six had a factory defect in the barrel which was replaced within the first couple months. I put Herrett stocks on mine.