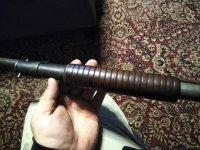 No screws in the slide

yovinny said:
Interesting that it has a 12 barrel stamping above the choke stamping... I'm no 97 expert, but I've owned at least a dozen and have 5 now and not a single one has ever had a 12 stamping there..
Click to expand...

I'm still a bit befuddled. Do you see anything else out of place or odd.

Guy at the shop looked it over and said that takedowns usually have a higher s/n and a modified choke in a takedown is odd. He also said that this was a time where people could a la carte order a 97 with what options they wanted. I don't know him so I take it with a grain of salt.

Feedback: 103 / 0 / 0
Thats the only thing that stood out to me,, but again, I'm no 97 expert..
Ive no idea how uncommon a mod choke is. Most of mine have been 20" cyl guns, except for a couple of long barrel full choked examples.

Where’d I set my drink?

Feedback: 0 / 0 / 0
This may be of interest:
https://www.americanrifleman.org/content/the-winchester-model-1897-a-look-back/ 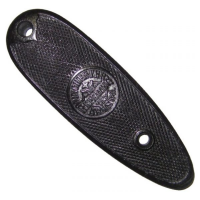 Wildcat said:
This may be of interest:
https://www.americanrifleman.org/content/the-winchester-model-1897-a-look-back/

From what I gathered online it could be a hard rubber buttplate or a metal one. It could possibly be a convex metal one.

I didn't pull the bubba recoil pad off yet. I'll get a better look when that happens. But I did buy a repro one like you have pictured.

I'll keep this one oiled up and off to the side until make sure that my work is up to snuff on some of my other scattergun projects.

Right now I've got my secret blend of eleven herbs and spices brewing in BLO to do the wood, and some chemistry supplies on the way to pop the grain.

According to it appears to be manufactured in 1904, or perhaps depending on how the info is interpreted 1905.

Aeroscout said:
I have found this reference to be handy.

According to it appears to be manufactured in 1904, or perhaps depending on how the info is interpreted 1905.
Click to expand...

That's what I was originally going by. I misread the s/n before I picked it up.

A 1904 complicates things a bit more, could be a rubber or metal one. A modified choke is also a bit confusing. And all of this combo together in a takedown model seems odd.

I'm not an expert on model 97s but I really do need to find one soon before I start this.

My ferric iodide pretreatment, and alkanet laced BLO finished with teak and buffed with beeswax would all be period correct for the wood.

Metal would be a rust blue, I have some variance here as Winchester subcontracted out all finishing work in this time frame.

Metal buttplate that could be a possibility pictured below

Feedback: 6 / 0 / 0
The old ‘97 is my hands down favorite pump gun. I still have a couple solid frame guns around here someplace. One from 1917 and the other from 1905 or 1907 if I remember right.
I was going through the shop inventory of take off butt plates a week ago looking for something else and found a couple hard rubber plates from prewar 97’s.
Don’t know where you are in Pa.- bring it by the shop and if one of them is a decent fit, I’ll donate it to the cause of getting another old 97 shooting again.
Or trace the butt onto a piece of paper and mail it to me- I’ll compare and send you one if it fits.
Here’s my contact
C.D.I. Custom Knife and Gun
226 Upper Stump Rd.
Chalfont, Pa. 18914
215-996-1603
Cdicustom@hotmail.com

akinnepa said:
Any insight on what the correct buttplate is?

I know a guy.
Go check your PMs.

The repro plate came today, I'll pull the bubba pad off this weekend and take a look

It's a "D" Model (Some use the term Series), looks to be made in 1906. I think it falls into the later model "D" Series since it doesn't have the earlier 1893/1897 "C" model/Early "D" Model action handle ( the 3 screw's through the pump action hand guard and into the short nosed rail assembly). I have a 1905 "Early Model" "D" about 20,000 units before yours, and a 1906 "Late Model" "D" about 40,000 units later than yours. It was definitely made before Dec. 25th 1906. The stock is NOT cut! To make it correct, it needs the Metal "Bird Beak" Butt plate and looks like it should swap right back on. Somebody swapped the Metal butt plate out for a recoil pad, probably because they do kick pretty good. The rounded handle on the Buttstock is a nice with an older model like yours (IMHO) and wanted by many cowboy action shooters (Wild Bunch look). It has in my opinion, the nicer flat head magazine tube cap and not the earlier Mushroom head tube cap.

I can't tell from the pictures what the "Modified Choke" length of the barrel is; but It looks like it maybe a 28" Modified (Disassembled it is 27 3/4" measured from end to end). That was a Winchester option No. 9703. Shotgun in that configuration was $43.40 with just the one Modified barrel on it or it was $63.60 if it came with the additional interchangeable 28" "Cylinder Brush Barrel". The other Modified Choke option is No. 9710. The 30" Barrel, Modified Choke, not sure on actual length disassembled breach to muzzle length. That option was also $43.30 for the single Modified Barrel or $63.60 with the additional 28" Cylinder Brush Barrel.

The "12" on the top of the Barrel. This is absolutely correct for that Year Manufactured shotgun and the Barrel is correct for the Receiver & Barrel Extension range. Do the 2 serial numbers match? Looks like the first 3 or 4 digits do in the pic. On that 12, that denotes that it is a 12 gauge.

To most Win 1897 owners that 12 on top is not there and will most likely look very strange. But notice the 10/16/1900 patent date. It is probably different than the ones they are familiar with.

Be AWARE, that yours is a "D" Model. I say that because Most 1897's out there are "E" models and some parts will not Interchange. Mainly the Shell Guide parts, Guide springs, etc. The shell guide screws on yours come in from the side where "E" models come in from the bottom and are very skinny. These "D" Series are often referred as "C" style parts even though on a "D" Model.

You have a nice pretty much correct Winchester 1897. Bird Beak Metal Butt plate will make it period correct. Refinish? You are already working on the wood and the metal I would Rust Blue/Brown.

It is NOT a good TRENCH GUN Candidate IMHO

One Word of Caution with the 1897 and Early Model 12's. Don't chamber a round with your finger on the trigger like you can with say a Mossberg 500. IT WILL SLAMFIRE!!!

They take some getting used to and believe it or not, it is real easy to have an accidental shooting. They are fun, but they have some issues you have to be attentive to.
Trigger hand Butt Stock placement is also important to avoid hammer bite (like a 1911 Colt, but not as painful as say Garand Thumb").

Feedback: 218 / 1 / 0
Hey,cool thread and thought i would just show a ressurected 1905 rem model 10 that was rusty and pitted. It had a 30"(?) Barrel that was bent..so cleaned it, got rid of rust but still pitted,chopped barrel to 19,parked it,found bayo mount repro(cruddy quality but works),found a new stock for cheap and made a quasi trench gun. The barrel was full choke but now basically no choke since chopped. There is no bead sight,just sight down the top ,it is a camp gun or if need a hd shottie(but benelli is main one). Takedown model but not with the bayo lug mount on it.
So this what i did to it... sounds like you have a pretty good idea what you want to do with it, good luck with the project. 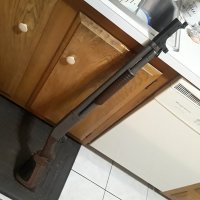 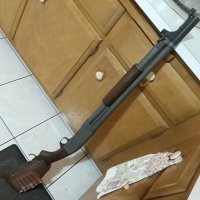 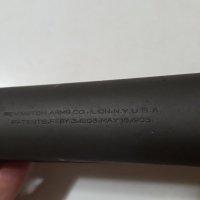 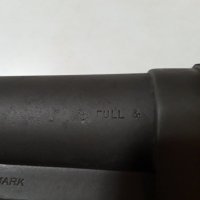 Found a butt plate on eBay that I snagged. From what I've read all early guns are hand fitted. The plate I got was unused and I need to fit the bottom. All other measurements are near perfect.

I got the checkered metal plate, which could be correct.
P

Feedback: 33 / 0 / 0
I have a pile of the correct Winchester steel buttplates if you need one
You must log in or register to reply here.
Share:
Facebook Email Link
Top